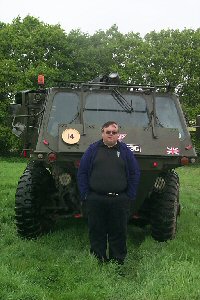 Hello - welcome to the "New Look" Web World!   Bear with me as these pages are always in the process of reconstruction! Contained within these pages are details of my family and myself and our life over here in England.   We live in the South East of England in Outer London not far from where we were both born (and certainly where Tanya was born!).  I was a Systems Analyst with the Ford Motor Company, specializing in Web development, Oracle Databases and Bespoke Software applications, and worked for the company for 30+ years but am now unemployed as my work was moved off-shore.  Val wais an Admin Assistant and worked at Tanyas old Primary school in the Schools general office. Now she is officially retired and on pension. I used to act as a Parent Governor for the same school - however when Tanya moved on to her Secondary school, Robert Clack in Dagenham, I stepped down. Currently I hold a Masters degree in IT and am a professional member of the British Computing Society.

Val is a Jehovah's Witness -from her earliest childhood. Check out the link for details on her beliefs (no foot in the door on this one !). My daughter and I have no formal faith - just a belief in a higher power. .

I served for 8 years with the Territorial Army.  Initially with 215 Sqdn, 151 (City of London) Regt Royal Corps of Transport) V.R. then transferring to 21 Regt (Artists Rifles) Regt SAS (R).  I left 21 in Sept. 1979, discharged P8 due to the onset of Temporal Lobe Epilepsy (please note - if you are looking for information on the SAS - you are in the wrong place!!   I signed the confidentiality agreement when I joined the Regiment and, unlike others , I regard this as binding until otherwise notified).   It was shortly after this I started developing an interest in Saab cars and aircraft - particularly the AJ37 Viggen.  What I wouldn't give for a chance to fly in one of these!!!!

Now in addition to the fleet of Saabs we had at one time a 1968 Alvis Stalwart in the family - aka Little Maud - she was an FV-622 G.S. Cargo model - I opted for this one rather than the FV623/624 models with the on-board cranes as I felt the additional stress on the front wheels would be too much of a problem. Plus the only real use for a crane would be removing main components, at which point the crane becomes inoperable!! She was joined in 2007 by a Czech OT-90 (see the link for the details) as I always wanted a piece of tracked armour!! These two old ladies are the greatest fun to drive imaginable!! Alas both have a fetish for filling stations - they cannot pass one without dropping in - usually to the consternation of the manager!! Sadly both are now sold - the Stalwart due to licensing issues and the OT-90 due to the cost of having to ship it everywhere. Instead the green fleet now comprises a 1973 Landrover Series 3 FFR, and 1974 UAZ 469 and a 1957 AEC Militant Mk 1

Well - I hope you get as much enjoyment from reading the pages as I did from creating them.   Please come back often as these pages will be updated as regularly as possible!!

Number of unique visitors to my world